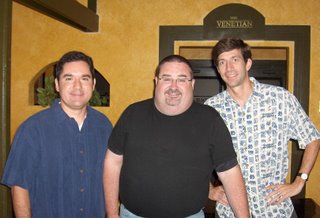 I finally got to see John Gros's band, Papa Grows Funk. They played here in San Diego for the first time on Wednesday night at a club called Winston's. Before the show, I had dinner with John, Mike Bergeron (pictured), and two other friends of John's that live in Carlsbad.

The show was great. It was a good size crowd to start with but "Papa" John really had them eating out of his hand after the first 20 minutes of non-stop New Orleans funk. It was fun to watch the crowd because most of them didn't know anything about the band, but by the end of the second set they didn't want Papa Grows Funk to leave! John played my request, Professor Longhair's "Big Chief", as the final song at around 1:30am.