One nice thing about summer vacation is that there's time to play. Sophie and Cindy created this Grover from blueberries, tomatoes, eggs, raisins, and cranberry raisins. They followed the instructions in Sesame Street Magazine. 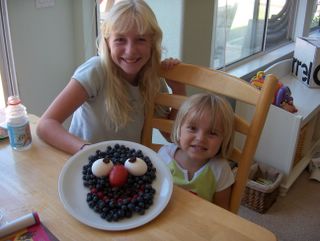 Cindy got cupcakes from her friend Luke, and boy was she excited! 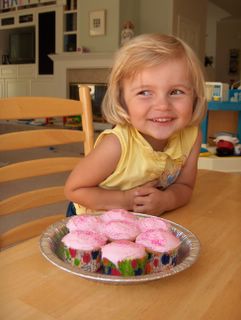 I recently added my Flickr badge to the right-hand side of this blog. This is a pretty cool technology that cycles through my public photos on Flickr. You have to have the Flash player installed to view it; otherwise, a less-cool HTML version is available:

As promised, here are some pictures from Cindy's birthday party at Terry and Mary's house and then our drive back, including a day in Sacramento.