Here's an interesting concept: BlogMap. This service allows bloggers to associate their physical location with their blog. You can then see who your neigbors are ("NeighBlog"). Here's mine: Remember back in the days when you made your own cassette tapes? Project C-90 is a Russian web site dedicated to the dying technology of audio cassette tapes. Walk down memory lane by checking out images of Memorex, Maxell, Sony and BASF tapes....

The Blue Jays made an early exit from the playoffs Saturday. It was their second close loss in as many games of the double-elimination tournament. The boys played well but just couldn't overcome some mistakes and some bad calls by the umpires. We'll get 'em next year! 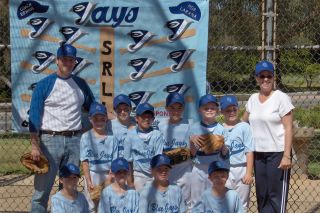 Sophie had her first band concert this week at Scripps Ranch High School. They played in a combined group with two other Scripps Ranch schools: EBS and Miramar Ranch.

A big box and two little kids can be hours of fun! 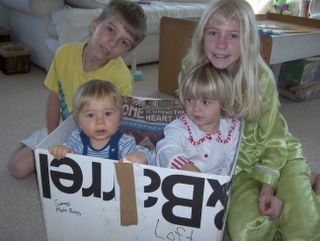 We had an exciting weekend! On Friday night, Sophie performed in the final Honor Choir concert of the year. She got an award for Most Improved Singer. On Saturday, Thomas's baseball team snapped a 7-game losing streak with a 30-23 victory (that's the most runs scored by any team this year). Thomas got lots of hits and made some great plays in the field. Cindy had some successes on the potty this weekend, and last but not least, Anthony figured out how to climb up stairs.